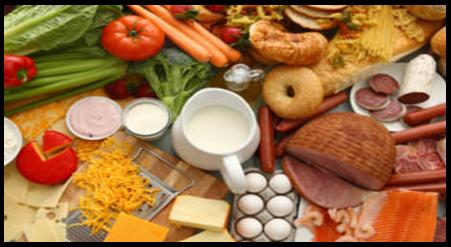 Why do we find that the “bad” food we enjoy tastes good, but the “good” food we should be eating for good health, does not always taste as good?  For humans a preference for what can be called good or bad food is a product of modern culture and nothing to do with evolution. [i] Eating can in fact be dangerous. While the food we ingest contains the nutrients and calories we require to produce energy and nourishment, it may also contain harmful bacteria, or chemicals. Consuming the wrong plant at the wrong time or eating too much of one plant and not enough of another can cause sickness, malnutrition and even death. [ii]

Nature gives clues as to whether a plant (or animal for that fact) is eatable or poisonous. Bright colours in nature will often indicate the thing is probably chemically defended – or in other words – is poisonous. Thousands of years of experience have taught animals which plants are safe to eat but research shows that when animals are introduced to new areas — or new plants are introduced to places native to animals — poisonings do occur. However poison is a somewhat subjective term.  Not everything is equally poisonous to everything that encounters it. [iii]

If we look at animals that are normally grass feeding, they know instinctively that grass is edible and that it tastes good. It would only be under unusual circumstances, such as during drought, that they would attempt to eat plants that were not normal in their diet or would not generally appeal to them.

Other animals, such as the Impala are browsers and eat a wide range of plant material. Impala and other antelope always nibble a tiny bit of a plant before feeding on it. As poisonous plants are usually bitter they will discover that in the first nibble and move on – the more bitter a plant or vegetable is, the more likely it is to either make you sick or kill you outright. From experience and testing they learn which plants are best to eat and which are unpalatable.[iv] If a mistake is made they could end up dead.

Elephants need a wide variety of foods (and a large quantity) to get all the nutrients they need. All elephants grow up in the herd and learn from their elders not only what can and can’t be eaten but also where to go at what time of year to find certain foods. They will even dig up minerals from the ground in order to supplement their diets. Studies have shown that food choice in elephants may be learned, from observation of other individuals in the herd, and maternal direction, rather than being instinctive.[v]

Humans were, up to very recently in our history, part of the same process: I’m hungry – can I eat this or will it kill me or make me sick? Getting food involves risk – not just from poisoning but being vulnerable to predation, and it also takes energy to chew, digest etc. So, the flipside of the question is: is it worth the risk and energy to eat something?

We often eat food because we like it and not because it is good for us. You may like it because it smells good or because it tastes good. You may dislike some types of food because they do not look, smell or taste very nice.[vi] Individuals also learn to choose what they eat through example.  Children eat what they are feed by the adults in their lives and in turn will be fond of the foods that are prepared for them.

During the evolution of our species, we were foragers, and in the beginning it is presumed humans would have eaten by instinct, like any mammal, and over time would have developed preferred tastes and experience in what were toxic and what was nutritious.

Taste feeding cues have help in developing and guiding our food selection. The senses of taste and smell have evolved to alert us to the bitter taste of poisons and the sour taste and off-putting smell of spoiled foods. They also motivate the seeking out of the high-quality foods, such as fat and sugar. [vii] Fruits are sweet and provide a quick energy boost, so we developed a taste for sweets. Unripe fruits are sour and not particularly nutritious so may be disinclined. We developed a dislike for alkaloids (bitterness) as most bitter foods are toxic/poisonous.[viii]

References for this Guide:

© The Non-Obsessive Way of Eating Company

Did You Know:
That the 14th of July is World Blood Donors Day

This site is designed for educational purposes only and is not engaged in rendering medical advice, legal advice, or professional services. If you feel that you have a medical problem, you should seek the advice of your physician or health care practitioner. For additional information please see our Terms and Conditions